Prior to buying a pair of rugby boots, you need to establish what position the buyer is most likely to play in the game. Various other variables to think about are.

Sizing and also Fit of the rugby boot

Rugby calls for a great deal of running as well as dealing with tackling, pushing, shoving , you need to have comfy boots with the ideal dimension as well as fit. Yet it is additionally vital to keep in mind that various makers have various sizing graph so you need to examine each buyers boots meticulously. A set that are too small, might create pain as well as even worse, discomfort during a game tor at training. The same may apply to boots that are too large.

Manufacturer of the boots

Generally, rugby boots are made from artificial products or natural leather. Natural leather is one of the most sturdy however tough to keep as a result of elements such as climate while artificial ones are waterproof as well as much more budget friendly yet typically much less resilient. The majority of rugby players favour the artificial ones.

Design of the boots themselves

Rugby boots have various cuts for rugby players to select from. They normally determine what to buy based upon their settings - ground conditions, position within the team when selecting a design of rugby boots. The design typically varies from low-cut, mid-cut, as well as high-cut. Low-cut is best for running. The mid-cut ones are best for assistance and also security. The high-cut offers excellent hold, ankle support and assistance, and also equilibrium which benefit protective gamers.

Studded boots or Moulded Soles - or a combination

It needs to be understood that specific position  in both games , union and league , require either moulded soles, normally rubber based, studded soles that have between 6 and 8 studs , or soles that may have a combination of rubberised studs and screw in studs allowing the player to change the length of the studs to suit ground conditions. (these also vary form country to country.

A lot of soft ground boots have removable studs to permit players to readjust their stud size based upon the ground conditions. As grounds get wetter we tend to see longer studs up to 21 mm , and then as the grounds dry out there is the ability to use 15mm studs or less.

The hard ground boots are one of the most usual kind of boots players will buy as they too can have a variety of studs and stud lengths but may well be low cut or mid cut boots with limited ankle support.

Astro Turf - is generally where players will buy moulded soles using either studs or wedges, or even a combination to improve speed, retain grip and use the wedges for push off and stopping.

Rough or uneven grounds we tend to see players buy higher ankle  boots that provide stability and protection for the ankle and foot, at the same time allowing them to change studs to suit wet and dry days..

Value for Money and Age

We need to think about innovations, the placement of cleats or studs ( legal positioning) , and also style that is both sturdy and also comfy. It is necessary to deal with a spending plan initially prior to acquiring a pair.

We need also consider the age of the player, his current sizing of shoes, how tall will he or she grow too. What changes in boot sizes will we see in a twelve month period, often in less than a season, or during the season. Boots for kids should suit the age and ground conditions and less on the position that they play.  This may change at 10 to 12 where players tend to specialise in there positional play and as such may need boots that are more suitable for front row players (scrummage), back row players , locks or second row , then on to the backline, Will he or she be kicking during the games, will they need lightweight boots for speed or a combination of a boot that allows for a clean kicking surface and not to heavy for sprinting.

Fortunately today is that some widely known brand names are generating top quality rugby boots at a terrific cost factor. This is a good idea particularly for those that are beginning with the rugby activity due to the fact that they can have the choice to attempt without spending a lot. For even more experienced rugby players that are needed to be in the playing field each day, a sturdy, high-grade set is a lot more essential, despite having greater cost factor. Again they will last a couple of seasons or more once we buy as an adult so paying a bit more becomes worthwhile.

Adidas may be a well-known brand and the fact is that most of their products deliver. One of the best examples are these rugby boots which are probably the lightest and the most comfortable. They are made for hard grounds, the removable studs are remarkable, and are great to be used by backs and kickers.

The boots have Adidas’ “Speedtraxion” stud alignment which is made for maximum acceleration. The heels have sprint frame construction which aids greatly in running, especially when changing directions during the game. But even if these boots are lightweight, many can say that they are durable too and can stand long play. 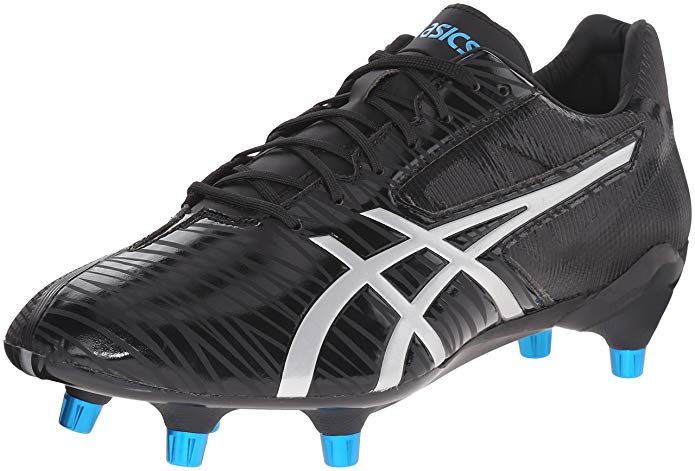 ASICS has been making quality rugby boots that deliver. For many years, it has been a brand of choice for players, regardless of the price. The Gel Lethal Speed Rugby shoes is one of the top choices for rugby backs but not for kickers.

These low-cut shoes are made from synthetic materials and boast of ultimate agility and mobility for players such as wingers and outside backs especially those who are running on the field most of the time. It features the HG10mm heel set-up with a higher upper height to help reduce strain on the lower limbs. It also has a Propulsion Trusstic System for stability. 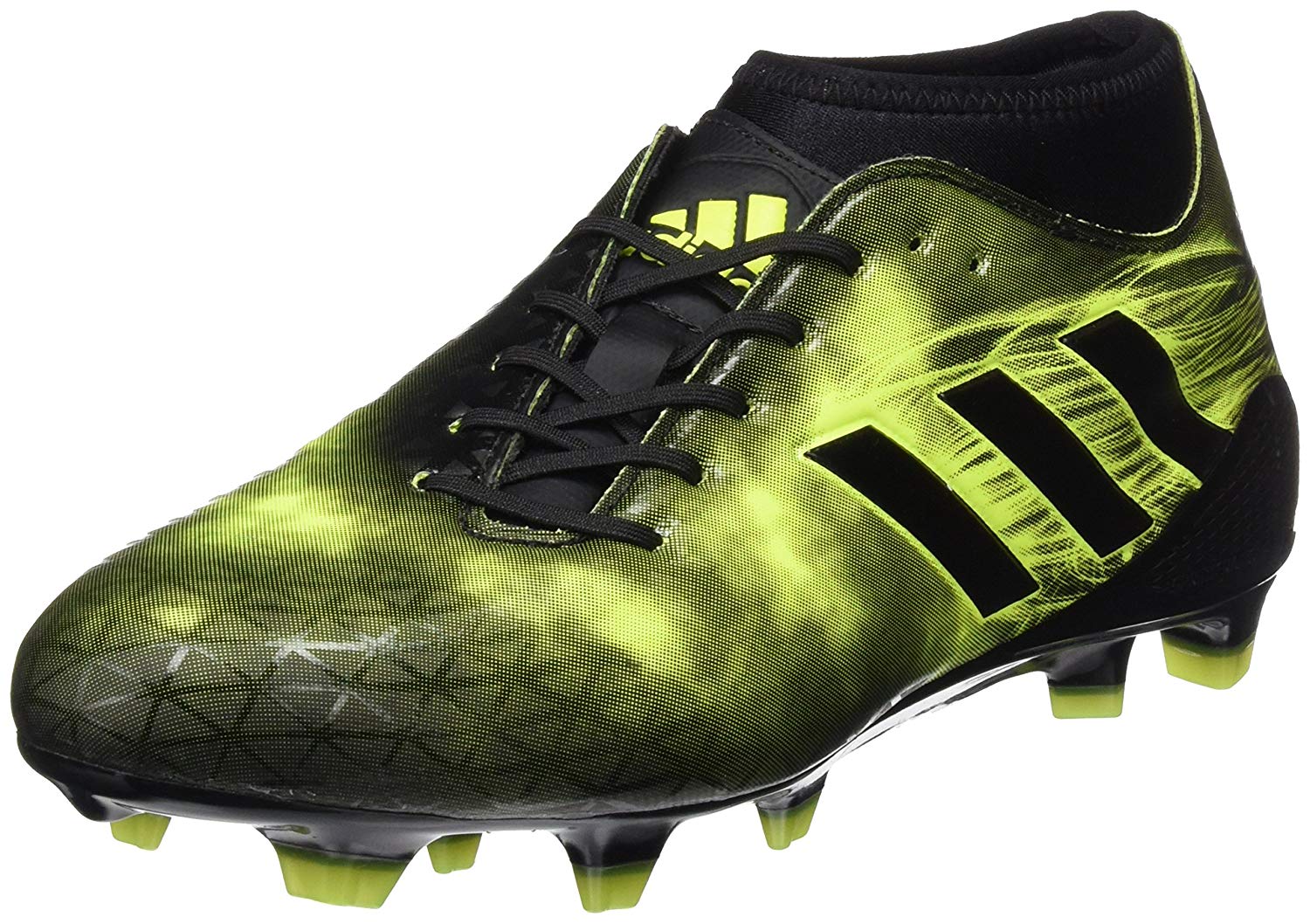 Another entry from Adidas with awesome design, comfort, and power. The adizero Malice is definitely a top choice for more rugby players.

The shoes are made from light-weight materials and are preferred by backs. It comes with an elastic sock made from neoprene to provide protection in the ankle, as well as comfortable snug-fitting. It also has an asymmetric lacing system that gives a larger surface area on the top of the forefoot for power kicking. Included in the features is a“sprintframe” to help you sprint past the opposite player.

These shoes are made to be worn on soft ground but the studs are ultimately design to prevent the mud from getting stuck so speed will be no issue. 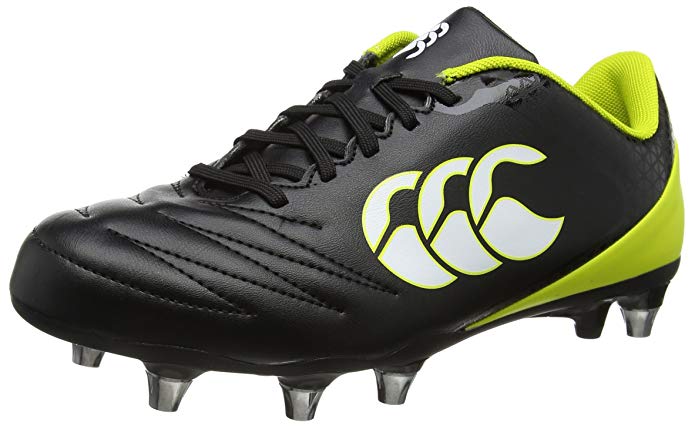 Canterbury is a well-known brand for rugby shoes. It is also among players’ favorite because of its performance on the field and its many features that benefits the players.

These rugby boots are constructed on a PowerLast that has a wider fit on the forefoot giving utmost comfort. It has the signature Canterbury heel raise at 88mm, which is indeed helpful is reducing leg strain. Perfect for Backrow forwards,

The Stampede 2.0 is built for soft ground. It is made of synthetic PU and has a padded collar with 10mm foam. While it is synthetic, the boots are guaranteed durable and can stand longer play. It comes with 8 studs and a bonus TPU traction.

This is the ultimate power boots at a great price, 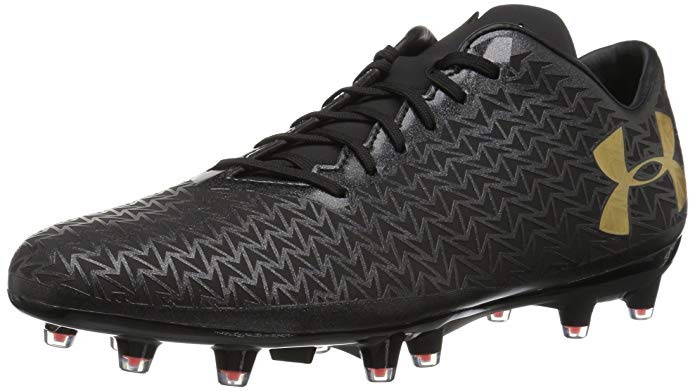 The Under Armour CoreSpeed is lightweight and is all about speed. The durability is unquestionable as well, given the brands reputation — Under Armour has a selection of superb rubgy boots that deliver in the court.

The CoreSpeed is made of synthetic leather uppers, providing a more comfortable feeling on the foot. It has a 3D printer layer on top the upper for an enhanced touch and better feel of the ball on the foot. Its special “Charged Cushioning” technology on the footbed absorbs impact and its newly innovated cleat plat works to mimic and aid the natural movement of the foot. It also has an internal shank built with BZM for utmost foot support and flexibility.

The good thing about these boots is that the studs are customizable. The overall design looks clean as well. 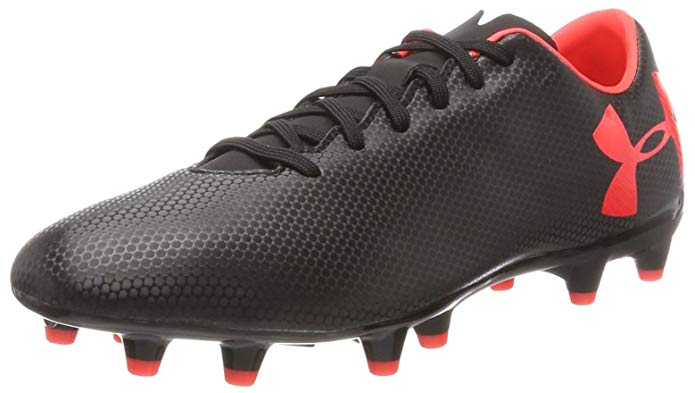 Rugby might appear to be a simple sport when it comes to equipment because there is almost no protective gear worn by players. Some even think that the sport only requires a good pair of rugby boots to get through a solid game. ( Plus Socks, Jerseys and Shorts)

In reality, finding that great pair of boots is very difficult. There are a lot of things to consider and not all sports brands or manufacturers have a shoe line solely for rugby shoes. And because of this, most rugby boots are deemed expensive. Some players even use soccer cleats when playing rugby but it is important to note that there are really cleats that are solely and exclusively made for playing rugby. These are the ones that can produce the right traction and protection for injury and can give the speed and comfort that most players wish for.

The position as a player also plays a big role when selecting the correct boots. Are you always running in the field? Are you responsible for the defense? Will the boots stand a lot of games?

Cookies help us deliver our services. By using our services, you agree to our use of cookies. Learn More Accept

Wait! We have something for you...

Don't leave empty-handed! Simply enter your email below and we will send you a great discount on our products and more information relative to this website and the game of Rugby Union

We hate spam as much as you do! Your details are never shared and you can unsubscribe at any time.